A few weeks ago my parents were almost the victims of a scammer. Without going into too much detail, my mother received a phone call from someone claiming to be her grandson (whom I’ll call John). He was crying and told her she needed to call his lawyer and wire money to him. He asked her to not tell anyone, including the authorities. She called my sister and asked her if she knew where John was and if my sister was sure of his whereabouts. She wouldn’t tell my sister why she called. Naturally, my sister asked why and was more than concerned about our mother’s call especially because she was being secretive.

When my mother called the so-called lawyer, she said she would drive the three hours to deliver the money personally. She offered this because she didn’t know how she would get the money to the lawyer without raising the suspicions of my father when he saw the withdrawal from their account. The lawyer then said that John was actually in Texas and not only three hours away. That is when my mom got wise. Thankfully. But for the better part of an hour, my mother is was frantic. The scammers even had the gall to call my father after speaking to my mother.  But my mother had already informed him about what happened, so he had some choice words for them before he hung up.

I have told my mother several times to never answer a call if she doesn’t recognize the phone number; that if it’s important a message will be left. But sometimes curiosity gets the best of her. I believe she now understands the reason why I told her to never answer without recognizing the number.

Our world is changing so much with the continuous advances in technology. As we age we don’t always keep up with new technologies. However, the scammers do. And their easy targets are seniors. The internet makes it too easy for scammers to get information about you and your family that can be used to their advantage. Seniors may not have too much of a footprint on the internet, yet the younger generations do. And a simple Google search of your name can return a lot of information about you as well as family members. And if the scammers pay for the information, I’m sure they get more information than you care to know. Or maybe you do.

But that is just one example out of many that take place every day. We need to be vigilant in protecting the seniors in our lives. In a report conducted by CNBC, it was estimated that seniors lost approximately $36 billion in 2015 to scammers.  And that might be a low estimate. We have to stay ahead of these shysters.

Here is a list of helpful websites that can help you and seniors stay safe from fraud and the criminals that target them. 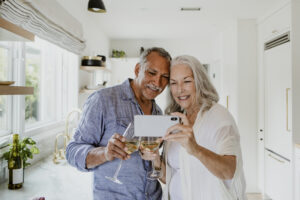